Bad boys can be good! 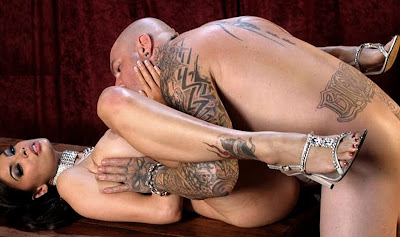 What is is about bad boys that attracts me to them?

Is it because they're the opposite of what I have at home? I have a man who is dependable and caring and loving and bad boys are -- everything but that?

I know they're players. Is that it? They're not looking to get married, they just want to get laid.

Or do I just like shocking my husband by fucking the bass player in a band?

I don't know what it is, and it's not always the case for sure, but sometimes there's just something super hot about going along with it when a bad boy hits on me. I haven't done it much, I guess three times in the last five years (?). But each of them was a total fucking turn on. I still think about them today.

There must be a 'type' that does it for me because every one of them had long hair, tattoos and wore jeans. Two had a pierced ear, one had more piercings. They all had that rough and tough guy look with that matter of fact, hey-lady-I-want-to-fuck-you-now attitude. Why does that do it for me? I don't know the answer but I do know that the sex was incredible!.

I especially remember getting jackhammered by one. He wasn't scary rough but he was the kind of guy who goes quiet once he starts fucking, and you can tell he's into the fuck more than he's into you. Maybe he was thinking about Angelina Jolie. I didn't care because I was busy cumming in one wave after another, brought on by the battering of his relentless pounding (yes, he used a condom). Before he finished I thought I was going to need a phone call from the Governor to save my weary ass. There are very few times in my life when I was exhausted from doing nothing. That night was one of them.

Bad boys. Why oh why do you do me this way?