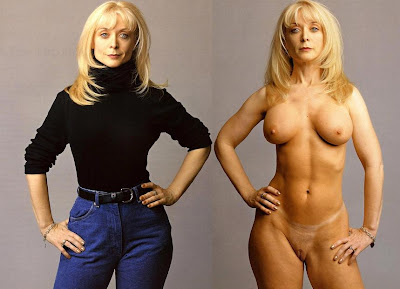 They crave the tease, then need relief from the tension caused by the teasing. They live in that zone between the two worlds, cycling back and forth constantly. It never stops.

If you want to keep him satisfied you can't stop either. But it takes very little on your part to keep him happy. It's easier than you think.

To him, YOU are the center of all teasing. Teasing is easy because it's natural for us. It's little things we do, like the way we dress. The way we talk. The way we act. Think about it. Your body is a natural tease for him. He's always focused on it. Exposing yourself, your breasts, your sex, is an easy but VERY effective way to tease. It inflames him, and it's fun. So flash him or walk around topless or bottomless at home. I do. It works! It's the easiest form of teasing and it makes me feel sexy.

Be sexual around him. Talk sexually. Use the power of suggestion. Let him know you have sexual thoughts. That will inflame HIS sexual thoughts FOR YOU.

Always remind him that you think about dating other men. Let him know that you look for dates. Flirt with men around your husband. Go out alone. Flirt with other men when you do. Place an ad on an adult website, or respond to one. Let him know you did.

All of that, and more, is the tease.

You don't have to sleep with another man every night. I don't. Most Hotwives don't.

But that's not nearly as important as constantly teasing him with the IDEA of it. Let him know it's on YOUR mind and it will stay on HIS mind, and that way HE TEASES HIMSELF. Do you see what I mean about it being easy? You just have to flash him, and hint at sex with other men to get the ball rolling. Then push it along occasionally. HE will do the rest of the work in his mind.

After teasing awhile, he will need release. My husband needs teasing one day and relief the next. Your husband will be different. Maybe he wants to be teased all week and have orgasms on the weekend. All men are different. You need to figure out what works best for your man.

Remember not to keep him waiting too long for relief or it will affect him (and your relationship). My husband will become distant and agitated if he goes too long without an orgasm. If I've been teasing him a great deal it's not unusual for him to need relief more than once a day. But if I'm planning to see someone else soon we often agree not to have any sex at all to heighten the sexual experience on my date (and after).

His relief can be any form of sex. The timing is more important than the act. Don't give it to him too soon or he won't get the full effect of your teasing. But don't wait too long or he'll get cranky.

Figure him out, keep him happy, and he'll let you rule his world. More importantly he'll let you run wild in yours and have all the dates you want and he will THANK YOU for going out on those dates.